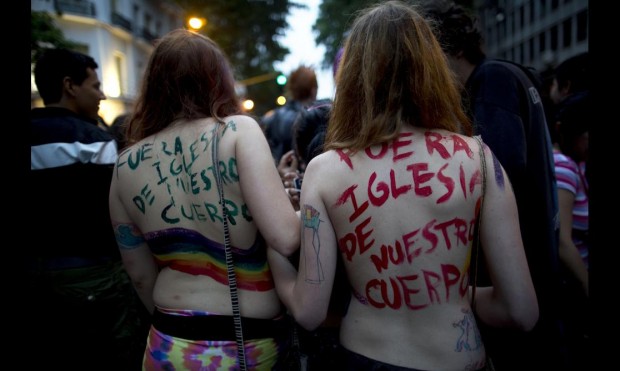 “Get your rosaries out of our ovaries,” chanted a group of topless feminists as they sexually assaulted and spray painted Catholic men who were peacefully praying outside of a cathedral in Argentina. When I first heard about it, I thought “Yeah, right! The religious right has found another story to exaggerate, dividing the lost from the saving grace of our Lord.”

Then, I saw the video footage.

Before I show it to you, I want to carefully navigate through another sexual myth because I believe the video footage is the logical conclusion if we allow this myth to become rooted.

In 2013, critiques by Shannon Hodde Miller, Jonathan Merritt,and Elrena Evans were among posts that brought my own name and that of my Secret Keeper Girl touring ministry into the debate. There were others whose voices were less reasonable. But I heard their concerns and even made a few changes to my website in response.

It would be unfair for me not to admit what I believe to be valid though I’ve previously printed it under a blog entitled “A Modest Proposal For My Critics.” (At the risk of sounding immodest: that’s a great title!) Here’s where I agree that the modesty movement is weak:

Some Modesty Advocates Are Legalists Who Objectify Women!

So many times when the Church addresses modesty, it’s from a heart of rule-based living. “Your skirt should be two inches below the knee.” “Your shorts need to come to the tips of your fingers.” “A Christian woman should never wear pants.” Others can choose to dress like that, but they cannot make it a mandate for me. Making these Biblical mandates and overly obsessing about the female body is both objectifying and shame-based. But that doesn’t mean we can’t have a healthy conversation about what’s appropriate for public showcasing of our beauty. Failure to do so places our daughters in the risky position of experiencing the consequences of  expressing their beauty through their sensuality. According to a task force report by the American Psychological Association, the hyper-sexualization of little girls by making them grow up too fast and expressing themselves through more sensual fashion increases the risk of eating disorders, depression and body image issues. The Medical Institute for Sexual Health has determined that girls (and boys) who “look older than they are” are at risk of an earlier sexual debut. How does a girl look older? By the way that she dresses and the make-up she wears. Years ago, something in my fashion-loving self just knew that I needed to be a woman who sounded the alarm to say: “Let’s let little girls be little girls!”

Most Modesty and Purity Advocates Have Inadvertently Made These Virtues About Getting The Boy!

For many years, the shallow end of the purity and modesty movement has offered the false promise of a guy in exchange for her purity ring or modest attire. How sad I am for that! Without even realizing it we have convinced girls they can make a deal with God: a turtle neck now and a wedding ring later. Modesty is not something you use to bargain with God or hide the female body. Here’s where I can agree with the critique of Sharon Hodde Miller:

The purpose of the body is to glorify God. Do we do that when we embrace the “skin-is-in” fashion that puts our daughter’s at risk? Good critiques like Miller’s and Merritt’s have been shaping and forming the way I have been communicating my messages about modesty and purity. Accountability through kind dialogue is always welcome! The modesty and purity movement must be careful not to unintentionally send a message that purity and modesty are about saving yourself for a man. The purpose of these messages is to protect and respect yourself, and—ultimately—to obey and glorify God.

These two weaknesses in the movement open us up to the kinds of messages that perpetuate unhelpful conversations like one that asserts that modesty promotes rape culture. However, we must be careful to avoid extremes. Modesty does not promote rape culture. Rather, teaching modesty enables us to exact behavior from ourselves that reflects God’s heart for sexuality.

Teaching modesty well does not emphasize the body, but the heart

As we say almost word-for-word every night at Secret Keeper Girl,

“God’s Word get’s the first and last word in everything we do….EVERYTHING…including what we wear. What does God want us to wear?

“I want women to be modest in their appearance. They should wear decent and appropriate clothing and not draw attention to themselves by the way they fix their hair or by wearing gold or pearls or expensive clothing. For women who claim to be devoted to God should make themselves attractive by the good things they do.” I Timothy 2:9,10 (NLT)

What God wants us to wear goes way deeper than skinny jeans or graphic t’s. God wants us to wear beautiful stuff INSIDE. Our inner garments are things like kindness, and humility or joy, helpfulness. God-crazy girls wear these beautiful “garments”. God wants you and I to make ourselves attractive by the “good things” we do—like helping your grandma rake her yard or volunteering at a soup kitchen with your mom.

The ultimate purpose of I Timothy 2:9,10 is to push us into goodness, not to make a lot of rules about our clothes.”

That’s what Secret Keeper Girls hear from my team. It’s content straight from God’s word. For that reason, I don’t sweat the critiques too much.

As I wrote for Christianity Today,

“Respect is at the heart of God’s intention for sexual expression. The Old Testament uses the word yada for sex. It means “to know, to be known, to be deeply respected.” God’s very definition of sex transcends the physical act and emphasizes emotional knowing and an exchange of respect.

….sex thrives in an atmosphere of control and respect. A study referenced in Sex in America found those having both the hottest and most frequent sex were not college co-eds with a variety of sexual partners but middle-aged people who embraced mutual lifetime monogamy out of respect for themselves and their partners. Another study concluded having more partners in their lifetime actually predicted less sexual satisfaction for men. Sexual self-control makes sense for both moral and practical reasons.

Teaching modesty and purity to women does not make them responsible for the way men behave. The Apostle Paul says quite the opposite. Ephesians 5 calls men to “present her a pure and spotless bride,” referencing a husband presenting his wife to God. While men and women are both charged to express self-control for their own individual purity, only men are charged specifically with being responsible for the sexual wholeness of the opposite gender. According to God, it’s the man’s responsibility to act in integrity regardless of how a woman acts or dresses. This seems to place the ultimate responsibility for respecting human sexuality squarely on the shoulders of men not woman. Protecting a sister’s sexual integrity is one of the highest forms of respect that a man can show to a woman. We don’t have to earn that respect, but we can be worthy of it. That’s why it is so important that women have good conversations with one another about modesty and purity, and why it’s especially important that we celebrate our daughter’s beauty while we teach them self-control.”

I am sensitive to point out that often times when rape occurs in a setting where legalism thrives and breeds upon itself, a very young woman who is abused or raped finds herself hurting deeply as she wonders if it was her fault. I have prayed with those whose horrible church experience makes her believe the way she dressed is what led to her victimization.

It was not your fault. There is nothing you could ever do that gives a person a right to rape you. NOTHING! And it must be so very painful to believe a lie that it might have been your fault. Please know that I care and despise the teachings that led you to that thought.

Despite those small pockets of bad teaching, good teaching of modesty teaches a girl to respect and even better protect herself. It is a grotesque exaggeration to state that teaching a girl to respect herself and to demand to be sexually respected by others will lead to rape. Those who embrace this myth have their ears tuned to the third wave feminist theology, not the Word of God. Further more, the myth fuels a hideous lie:

I can do whatever I want.

Oh, I’m not talking about careers here. Feminists long ago accomplished the task of enabling women. We now believe we can do anything we want. And, for the most part, have opportunity to do it. Become president. Work from home. Run a Fortune 500 Company. Raise children.

But the third wave feminists have upped the ante to something terribly illogical:

I can do whatever I want and the consequences are never my fault.

No. You can’t behave anyway you want without people losing respect for you. (Slut Walks come to mind.)

Let me say a word about date rape here, because it is bound to come up in the comments. I’ll save you the time. Date rape is a terribly travesty and I abhor it, having even attended a seminar by third wave feminist Jessica Valenti to become more “rape literate”. I agreed with so much of what she said, but wonder why the movement doesn’t choose to decry the porn industry or Hooters where women are so disrespected. Instead, the arrows of discontent are aimed at the modesty movement that encourages respect for women? While a few of ours teach modesty terribly, the vast majority of us do it well. Help me understand this terrible contradiction. I would think feminist would love an intelligent approach to modesty!

Saying that teaching modesty promotes rape is not only a gross exaggeration, but it is an invitation for women to believe they can behave anyway they want and the consequences are never their fault.

I believe that leads to the very disrespectful—of self and others—behavior that some feminists chose in Argentina a couple of months ago. And before you watch the video, know this: it does not represent MOST feminists. Just SOME. Not for a moment do I want to commit the same disrespect to their movement that they have done to mine.

Not all feminists would behave this way.

But SOME did and I believe it was perpetuated by myths like the one about modesty.

You won’t believe your eyes.

The actual footage  is something you will never see because the Internet has been wiped clean of the most graphic videos, with only tell-tale signs that they once existed due to references in aged news articles. What you are about to look at if you press play is the “nice” version.

I can’t help but think that these girls would have benefitted from someone who told them they were worthy of self-respect.

And taught them about modesty.