Can A Black Woman Marry A White Man? [VIDEO] 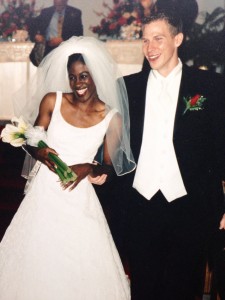 “There are probably more vicious white supremacists all over America today than there were in 1968 when Martin Luther King, Jr. was killed in Memphis, Tennessee.” I read that sentence one month before Michael Brown was shot in Ferguson, and it ignited something in my spirit so passionate that my pen became a sword in my hand as I scribbled words of war in the very pages where I found it. I don’t know who wrote more words on that page: John Piper (whose book I was reading) or myself.  I only know that since July my spirit has been awakened to address the racial division in my world, but I’m afraid.

Our nation is ablaze.

The combustible matter of hearts wounded by racism has been kindled into fury. What could I possibly have to contribute? Here’s what I have to say: racism is a strike at the the heart of God’s intention for marriage.

Before I tell you what racism has to do with marriage, let me share two fears as I write this. First of all, I fear you will think my life has been untouched by racism. It’s true that I’m a white girl from Central Pennsylvania, but that does not mean I don’t have a few scars from this battle.

While I was in the process of adopting my Asian beauty of a daughter, a woman walked up to me and simply said, “It would be better if you would adopt someone white.”

The breath was taken right out of me! This woman was a CHRISTIAN. And it was the year 2007. Wasn’t racism like that a thing of the past? I knew then that our family—and especially Autumn herself—would face racism. What I did not know is that most of it would happen inside the Church.

John Piper once posed the question, “Are our churches thermometers registering the racial attitudes and actions of the world; or are they thermostats raising the warmth of commitment to racial understanding  and love and demonstrable harmony?”

I’m thankful to have experienced some thermostat-Church life, but I would say that some of the “Church” environments my daughter and our family have had to endure were more like racially frigid walk-in freezers. While few offered blatant blows, most offer a silence on the issue.

That’s why I have to speak up. My scars are very superficial compared to what some have born, but they have been a fuel God has used to awaken my spirit to something we must talk about: racism is a strike at the heart of God’s intention for marriage.

My second fear is that I’ll say the wrong thing. And this is what has kept me silent for so long, but no more. I choose to risk being misunderstood and even wrong rather than silent. I know it’s possible to have the right heart, but the wrong words. For example, you know what to call me. I’m a white girl. But what should I call you if you are black? I once used that term and was duly chided for not using the politically correct term African-American. Then, I used African-American and was criticized for not using the term black. My point is this: I know that I might not say everything well, but I hope you will see my heart and we can have a loving conversation that brings us closer.

I’ve taken five months to consider where we should begin. Let me start with a simple, practical question. Can a black woman marry a white man? The Word of God puts certain inconvenient guardrails on the conclusion for us. While the Bible offers us some specific and strong advice for marriage partners which I’ve outlined in several of my books including And the Bride Wore White and Get Lost: A Girl’s Guide To True Love, it offers only two unalterable mandates for a you when you are selecting a marriage partner.

There is nothing in the Bible that forbids the marrying between races. The Bible never forbids inter-racial marriage nor does it specifically instruct that marriage must be within your personal race. (The fact is, our skin color is a barely perceptible difference if you look at it in terms of science.) We also have biblical examples of interracial marriage. Moses married outside of his race. Zipporah was likely a black African possibly from Ethiopia. Moses was not. (Numbers 12:1-3)

But that’s not really what I want to say to you today about racism and marriage. Stick with me: racism is a strike at the heart of God’s intention for marriage.

Here’s what I wrote in the margins of my book the day I took up my sword to fight racial division. 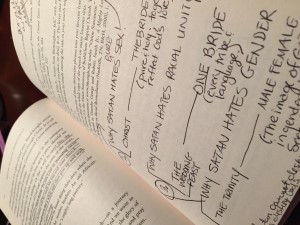 SATAN HATES DISTINCT BIOLOGICAL SEX…because in biological sex, we see God’s image. His picture. “So God created man in his own image, in the image of God he created them; male and female he created them.” (Genesis 1:27) While we are offered many God-like traits, no others are isolated and esteemed the way that biological sex is in the Genesis account. It’s what makes the lost world see him. For this reason, I embrace the fullness of my womanhood and reject anything that seeks to willfully diminish it.

SATAN HATES PURE, MARITAL UNION…because it is a picture of God’s love. His invitation. The mystery. “For this reason, a man shall leave his father and mother and be joined to his wife, and the two will become one flesh. This is a great mystery; but I’m speaking of Christ and the Church.” (Ephesians 5:31,32) Marriage—and the sexual union that bonds it— is meant to mysteriously display the unbreakable, covenant love of Christ for the Church which will culminate at the wedding feast of the lamb. For this reason, I receive the gift of marriage and my pure, holy marriage bed; and rebuke anything that seeks to willfully defile it.

But we can’t stop there. If the purpose of marriage is to be a picture of Christ’s love for his Bride, you must consider what that love looks like. And that takes you to the wedding feast of the lamb where it is culminated, for we are only tasting of the deposit of such love in this Church age. That’s why we must also declare this:

SATAN HATES RACIAL UNITY...because at the wedding feast of the lamb, we are ONE BRIDE! Every tribe. Every nation. Every tongue. We must worship him in unity as ONE BRIDE. “And they sang a new song, saying, ‘Worthy are You [, Lamb of God,] to take the book and to break its seals; for You were slain, and purchased for God with Your blood men from every tribe and tongue and people and nation. You have made them to be a kingdom and priests to our God; and they will reign upon the earth.” (Revelation 5:9-10) For this reason, I embrace the oneness and unity of the Bride of Christ; and rise up against anything that willfully seeks to dis-unify her.

Satan cannot destroy God, but he can destroy God’s image and the pictures of his love that draw a lost world to him. When we fail to confront racism and disunity, we are cooperating with the plans of the enemy to dismantle humanity’s ability to see God.

Can a black woman marry a white man? Absolutely. And I’ll dance a little harder at those weddings. You see, without over-stating my case, I believe a bi-racial marriage just might be a more perfect and powerful picture of the marriage supper of the lamb than a same-race marriage. What are we doing to understand and prepare for that depth of unity?

Don’t think too hard. Don’t strategize. Bring it down to a personal level. How are YOU moving forward in building the unity of the Bride? Tell me. Encourage one another with ideas. Leave them below in a comment.

“The pursuit of diversity can sometimes seem daunting…pastors come up with all these plans and committee groups…but all you really need to do is love your neighbor as yourself. Open your door and invite someone in. The Lord can use small things. Don’t despise the day of small beginnings.” –Trillia Newbell

Trillia Newbell: The Pursuit of Diversity from Igniting Women on Vimeo.