Has The Greatest Picture In The World Been Stolen? 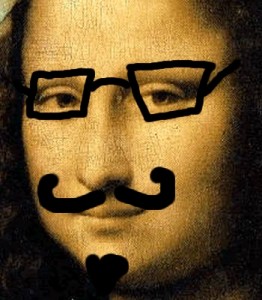 In May, I had the honor of viewing the world’s most famous painting: the Mona Lisa. When you see it, you really do have to ask WHY it is so famous! The ambiguity of the subject’s expression and the subtle modeling of forms are novels that call out for the work to be continually studied, but as a painting it is not that remarkable. Kind of like a sixteenth century school photo of profile photo, but certainly not something you’d expect to become so valuable that no insurance company will cover it. Still, it’s like there’s something there that we can’t quite see. After five hundred years, we still yearn to understand it.

In 1911, the Mona Lisa was stolen.  Nothing remained but four iron pegs upon where it once sat. The head of guards did nothing, thinking that the great work of art had been taken out for photographs for marketing purposes. The greatest picture in the world, and those entrusted to it did nothing upon it’s theft.

If you’ve read any of the books I’ve published on purity, you know that I hold dearly the truth that God created marriage to be a portrait of his love for us. Ephesians 5:31,32 reads, ” “For this reason a man will leave his father and mother and be united to his wife, and the two will become one flesh. This is a profound mystery—but I am talking about Christ and the church.” One man. One woman. In holy covenant with one another for a lifetime. That gives us a glimpse of something of what God’s love looks like for us.

I suppose you could compare the current state of marriage  to that of creating a caricature of Mona Lisa. Maybe you could say it is something like taking a can of spray paint to litter the work with graffiti. I think it’s much more than that. I think the picture of the gospel is being stolen right from under our noses. What are you doing to bring it back?

For more on the Mona Lisa and the picture of marriage, watch this video from my Get Lost series. http://vimeo.com/78528722