nonSpeed Dating for Dummies: is he willing to inconvenience himself for you? 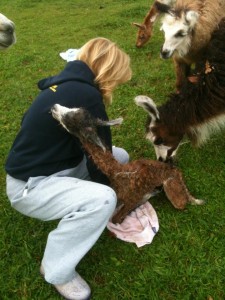 I have enjoyed a special connection with Nessie and her mama Scout. I was Scout’s midwife when Nessie came in to the world. You can see us cleaning Nessie,—just moments old—, as a team in the picture to the left.

As I was writing Get Lost last summer, I looked out the window to see Nessie was communicating clearly to her mama, Scout. That baby wanted some of the wonderful llama milk under her mother’s belly. Scout was rather intent on walking over to the mound of hay Bob was putting out at that moment. She didn’t want to stop to nurse Nessie. That was clear. She put her ears back and attempted a gentle kick, but stopped short.

There have been other times where Nessie, seeming to sense that her llama mama had some place to be, bounced along beside her suppressing her need to nurse until the pair arrived at their destination. This was not one of them. Baby needed milk.

I saw the reluctance in Scout. She was eager to get her share of that hay from Farmer Bob. And the other llamas can eat so quickly! I didn’t think she was going to stop.

She submitted to her baby’s need.

Scout’s act of kindness really spoke volumes to my heart that day.

Through it, God whispered something in to my spirit about how men and women love well by submitting “to each other” (Ephesians 5:21). Submission is really an act of kindness that puts the thoughts, needs, and preferences of the other ahead of your own. This is often a great inconvenience—as it was for Scout that day—, but one God asks us to embrace. 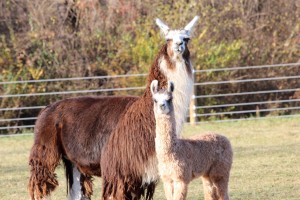 The Church teaches often—and even argues— about women and submission, but hardly anyone ever talks about the submission of a good, godly man. I’d like to do that today because within the last twenty four hours I believe God has brought the word picture he was teaching me through that mama llama full circle.

I cry as I think of it. Nessie is now eighteen months old and capable of living without her sweet mama, but clearly would rather not. She’s been standing in one spot staring mournfully at the place where it happened.

I don’t know what happened, only that my sweet husband tucked me in to bed and invited me to sleep in yesterday. I did. Late in the day when I went to feed the herd I could not find Scoutie. I reasoned that she was in the outer shelter and so lugged an armful of sweet, green hay out to her only to find an empty shed.

I turned and hollered to Bob who was just getting home from work, “I can’t find Scout.”

I knew without asking not only that she was gone but that he’d spent the day protecting me. That’s just how my love is: He inconveniences himself to shield me. I later learned through others, that he cancelled his first early morning appointment and called a friend to help him move our most beautiful llama so I would not have to see her in the tragic accident that occurred. Then, he hired a guy with a backhoe to dig a hole, and came home from work to meet him. They buried her so I could remember her as she was.

He inconvenienced himself to take the brunt of the horror for me. Oh, how heavy his heart was last night and I knew he carried the grief so I would not have to.

You don’t get a man who will, as Ephesians says, “give himself up for” you by accident. He is intentionally raised to be that way. My 23-year-old son displayed this quality last week when he took his car to get the pollen washed off of it before a date with his girlfriend. He cared about what condition the car was in when she got in to it, so he went out of his way to clean it up. A guy displays the ability to give himself up in big things by doing it in little things. You see it when:

These small inconveniences are proof that his heart is willing to be submitted to your thoughts, needs, and preferences. God’s call for a man to give himself up is so that he can mirror the agape love of Jesus Christ is so much more difficult than a woman’s to submit to her husband’s decisions. A woman’s submission is occasional when the two don’t agree. But a man’s submission to his wife’s needs is continutal. On going. Everyday. And in the safe place it provides, it is not hard to let him break a tie or two when you have differences of opinion.

Here’s the real clincher: Ultimately, neither the woman or the man submits in marriage because the other is worthy of it. They’re not. But Christ is. And this is what is required of us in male and female relationship:

“Submit to one another out of reverence for Christ.” Ephesians 5:21 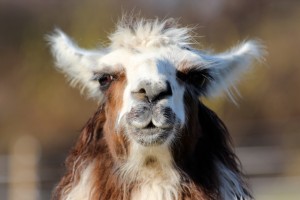 A llama cannot submit out of reverence to Christ. Clearly. But nine months ago, God used this one to teach me a little something about my definition of submission. For that, I’ll always remember bold, beautiful Scout. I hope you’ll learn a little something from her, too. That you are worthy of someone seeing your needs, and inconveniencing themselves to meet them.

Does the guy in your life—if there is one right now—inconvenience himself for you?