Pulling Back the Shades: True Confessions from Dannah & Juli 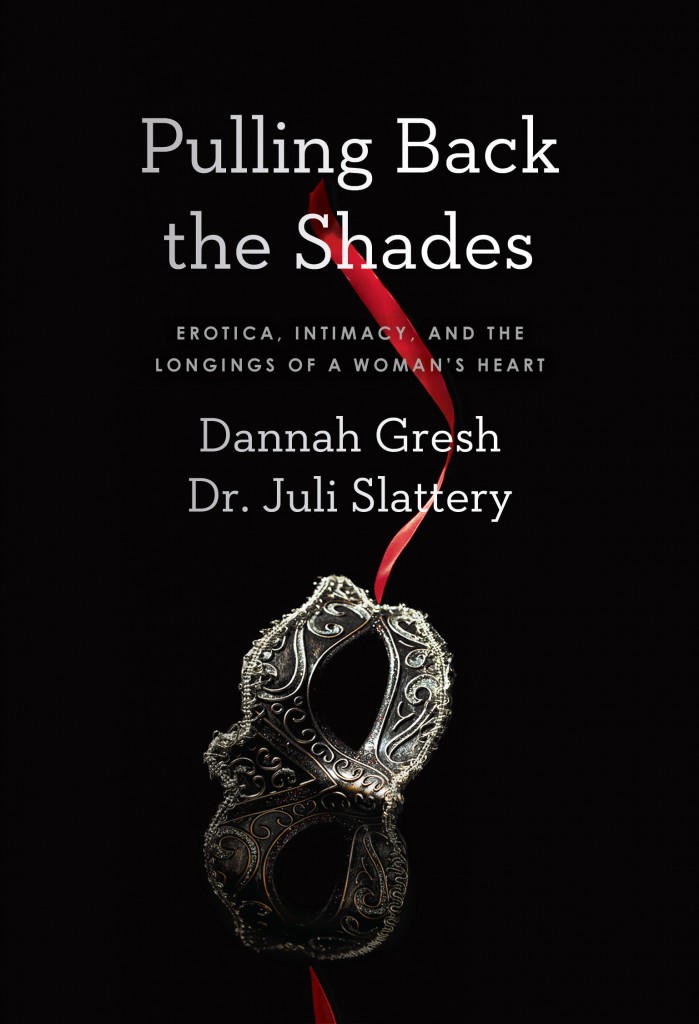 This is a book we never expected to write about – a book we never expected you to read: Fifty Shades of Grey. How could this book series have sold over 70 million copies in its first year? And now it’s not just that series being devoured by women, but an entire lineup of copycat books rushed to the market so fast that the BBC reported erotica to be “cannibalizing” the rest of the publishing industry. Erotica is the fastest-selling genre of books selling to women.

Some consider the story of Christian and Anastasia, the hero and protagonist in the Fifty Shades series, to be one of love and healing. Others say it’s degrading and pornographic. There are plenty of opinions on both sides of the debate and no doubt you have yours. But before we dive into our opinions, we have to stop and confess a few things about our initial reactions to the movement.

I, Dannah, was introduced to the book by my husband, who’d been hearing about it in the media buzz. One night he couldn’t take it anymore.

“You’ve got to write about this book,” Bob said incredulously. He plopped a laptop in front of me and pushed play. A Saturday Night Live commercial spoof for amazon.com began. It was advertising a book I’d never heard of before: Fifty Shades of Grey.

I pushed the computer away and told my husband matter-of-factly, “Oh, honey, I’m not going to write about that. I don’t think that many spiritual women will be attracted to it.”

The next day my mom told me a friend of hers had read it.

The next week a friend of mine told me her seventy-year-old mother had her name on a very long list at the library to get it.

The conversation had begun and it seemed everywhere I turned, a friend, family member, or acquaintance was either reading the books or asking if they should. Some of them specifically mentioned that they were excited that people were finally talking about topics like spanking.

Spiritual women, all of them.

Apparently, as a sexuality expert and relationship coach to spiritual women, I did need to write about this. So I wrote a blog titled “I’m Not Reading Fifty Shades of Grey.” It sparked a fuel-fire of controversy with over fourteen hundred women choosing to pound out their opinions, long paragraph followed by long paragraph. Some defended the book and their choice to read it and criticized me for being judgmental. Others applauded me. Many wondered how I could critique it without having ever read it.

But I still haven’t.

What I have read are the stories of countless women who have read Fifty Shades of Grey or other books in the erotica genre. It turns out I was very wrong: spiritual women do read erotica.

Praying grandmas are reading it.

Pastors’ wives are reading it.

Homeschooled teenage girls are reading it.

The heads of charitable foundations are reading it.

Missionaries are reading it.

Professors of religion are reading it.

Jews, Muslims, and Christians are reading it.

I thought long and hard before I decided not to read it. While one obvious reason was that I’d already publicly stated that I wouldn’t, another was that I want to dispel the myth that you have to read it to be able to have an informed opinion and engage in the debate. I have taken the time to come at this debate from another angle by engaging in the stories of women whose lives have been impacted by erotica. Email by email, they poured their hearts out. Many of them were brave enough to tell their stories, some of which you’ll read in this book.

I, Juli, am a clinical psychologist and the cofounder of a ministry that focuses on intimacy for women. The Fifty Shades phenomenon had my attention right away. Frankly, I thought it was a passing fad. I never dreamed it would catch fire as it has.

I began to write and do interviews about the book series and stated that I would not be reading them. Some women responded with comments like, “How can you know they are bad if you don’t read them? It’s really a love story!”

When I sensed the Lord prompting me and Dannah to write this book, I realized I would have to read Fifty Shades. I was very reluctant. My husband, Mike, and I have worked hard over the years to develop a fulfilling and pure sex life. I didn’t want to take the risk of reading something that might taint what we had fought to secure. So with lots of prayer cover, I began to read the books, asking God to give me His wisdom to discern truth.

These books are not black and white. Woven throughout their countless and graphic sexual encounters, Christian and Ana are seeking love. One might even argue that they end up healing each other in this strange, fictional world. Even though I read the books in a spirit of prayer—literally on my knees—I got pulled into the story. My body even got pulled in. There were times while reading the series that I was appalled by the graphic and twisted sexual scenes—but I was also aroused. These books are powerful and had a significant impact on me. I find it difficult to believe women who say, “I read all three books. They didn’t really affect me.” I want to say, “Then why did you read all three? Something kept your attention!”

On March 1st, we will be releasing, Pulling Back the Shades. You might consider this a double play on words. Not only do we want to pull back the shades of Grey for you to see God’s truth about what it and other books like it can do in your life, but we also want to pull back the shades on your own sex life. This book is not meant to be merely a reaction to Fifty Shades of Grey. Ultimately it is about YOU—your longings, your questions, and your wholeness as a spiritual and sexual woman. We hope to offer you something you deeply need.

To pre-order your copy of this book, click here.