Happily Ever After Begins Here…

Dannah’s newest book, Get Lost is due out April 1st! We are so excited about it that we thought we would share a sneak peek with you! Centered around the quote, “A girl needs to be so lost in God that a guy has to seek Him to find her,” the book is filled with inspiring stories like this one:

“We don’t always get to choose our sacrifices. Such was the story of Heather Bullock. 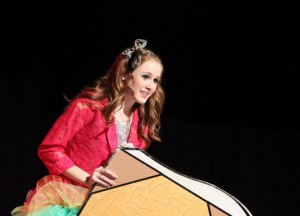 She had a dream life complete with a dream guy. And a dream proposal that happened on a boat while dolphins jumped in the water. On top of all that came a dream house highlighted by a rainbow overhead when Heather and her fiancé found it. (No kidding!)

After six years of dating, this college senior’s life was going just like she’d planned. The wedding invitations had been sent. Her dress was ready. The next three months couldn’t go fast enough.

Then came the text.

He didn’t love her.  He wanted out.

Taylor Swift’s twenty-seven-second breakup telephone call from Joe Jonas doesn’t hold a candle to this heartless act. Breaking an engagement by text? Heather was left breathless. She cried more tears than she thought possible. Spent hours in the fetal position. Tossed and turned and watched old episodes of I Love Lucy through the night. And her Savior saw her. The Word who was and is and is to come, may just have inspired these words for her long ache of a night:

“You have kept count of my tossings;

put my tears in your bottle.

For the next four weeks, she mourned the death of her love and her life as she knew it. Then came the sun.

It rose over lingering thunderheads that Thursday morning, creating a spectacle of God’s glory that called even a broken-hearted bride to worship. It felt like a promise to her crushed spirit. In the morning rush to her student teaching assignment, she snapped a quick picture with her iPhone. She didn’t aim. She didn’t look. Until she got to school. There she grabbed her phone and glanced down to see what she’d captured.

It wasn’t what she expected. Tears flowed. Not tears of grief but of hope. 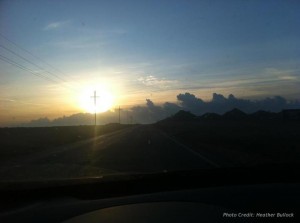 In the photo on her iPhone the glorious morning rays served as a backdrop to a solid telephone pole, which created the unmistakable silhouette of the cross. Heather found herself breathless once again, but this time from the magnificence of a certainty that she knows a Love that never leaves, never hurts, never rejects.

At some point, each of us must choose if we will hold tightly to the broken pieces of our shattered plans as victims do, or if we will drag them up and hoist them onto the altar of sacrifice as victors do.  Heather chose victory.

The sacrifice is what gave her the strength to abandon her plans completely and ask God to reveal His plan for her. And it’s what brought her to me here at Pure Freedom and Secret Keeper Girl headquarters.

You see, on one of the bad days, Heather decided she might just have to become an astronaut. Even visited the NASA website to learn how. Upon hearing of her wayward Googling, a true friend helped her redirect it. “Let’s Google ‘ministry internships for Christian women,’” her friend suggested.

They did. And found mine.

Heather was not new to our ministry. She had used And The Bride Wore White as a tool to guard her purity in that long relationship. And now, she’s so thankful that she did. For the past few months she has been continuing to heal, all the while fearlessly pouring out everything she has into the hearts of teen girls. (Which I’d take over being an astronaut any day!) That’s what I call sacrifice. Giving Him everything, when it feels like nothing is left. She’s as lost in God as she’s ever been.”

Encouraged by Heather’s story? This is just one of many inspiring testimonies that appear throughout the book! Dannah traces God’s language of love through Scripture to help you pursue your heart’s deepest desires and seek love the way God designed it to be. With a guided ten-day Love Feast, Get Lost will help you see for yourself how getting lost in God opens the door to lifelong fulfillment. Click here to pre-order yours now!

get lost from dannahgresh on Vimeo.