Revenge of the Church Ladies 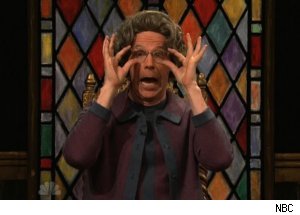 It’s rumored to be true, but I haven’t been able to document it.

Apparently, the findings of one of the nation’s most respected studies on human sexuality—which I can share with you in brief here—were so unbelievable in terms of religiously active women being happiest with their sex lives that a major national paper ran an article entitle “Revenge of the Church Ladies.” (“Well, isn’t that special!”)

A study conducted by the University of Chicago, and considered to be one of the most statistically accurate studies on sexuality available today, determined that the most orgasmic women in the United States are middle-aged, married, conservative Protestant women, with 32 percent claiming they climax with orgasm every time they have sex. Mainline Protestants and Catholics were just behind them at 27 and 26 percent respectively, but those with no religious affiliation claimed to have orgasms only 22 percent of the time. Furthermore, those having the most sex were not the singles, but women in monogamous marriages—and they liked it more than singles.

I have a Church Lady Challenge for all you girls out there in the Church.

As it turns out, a casual treatment of sex does not give a woman more but less. Those of you who are waiting and can’t wait: keep waiting because it will be worth it. As the Hebrew word I trace through What Are You Waiting For: The One Thing No On Ever Tells You About Sex indicates, true sex is much more about the spirit and emotion than the body. It takes a deep, intimate knowing and respect to experience anything more than a counterfeit that looks a little like sex but just isn’t. It takes more than buff bodies with fresh spring break tans to create the best sex on the planet! Without the knowing and respect, we can’t know the depth of physical pleasure.

Secular humanism. The New Age movement. Eastern religions. Many make claims on sexuality, but none compare to what the One True God created it to be. Take for example the Kama Sutra. Written by Vantsyayana, a Hindu philosopher, it claims to be the first book written on the art of lovemaking. (At a glance, it seems to be purely about physical pleasure, but it is rooted in Eastern mysticism and many of the sexual positions are modified Hindu worship positions.) In her applause for the book, Bobbi Dempsey, author of a tragically confusing book on sexual pleasure, says that “Christian and Jewish texts and teachings contain no mention of…sex. In fact, these two religions make little or no connection between sex and worship at all.”

Mind if I blow this out of the water?

In truth, of all the world religions, Christianity alone boasts the most radical of holy books. Perhaps you’ve heard of it? It’s called the Song of Solomon, or Song of Songs. This celebration of unashamed physical pleasure stands out uniquely among religious books. Written in approximately 970 BC, it beats Kama Sutra by 1,320 years. How’s that for a Church-Lady-thrashing? (For more on Song of Solomon see the last chapter of What Are You Waiting For?)

Church Ladies stand strong. Our decisions to abide by God’s standards of excellence and purity are not arbitrary. He had a plan. (Next week I’ll blog a little bit about that plan when I share the “Strangest Sex Fact Ever!”) But let’s not be the slightest bit ashamed of our decision to dare to believe that in waiting we can actually experience more. The gift of sex–and the holy treatment a Christian worldview wraps it in—is something we should shout about!

Are you “religiously active”—embracing the death of Christ as your life?

Are you choosing purity in your life today despite any impurity that may have existed in your past?

If you answer “yes” to all of these, you qualify to take the Church Lady Challenge. Next Monday I will award one reading club pack of ten signed copies of What Are You Waiting For: The One Thing No One Ever Tells You About Sex to two individual winners which will be selected randomly. There are two ways you can qualify for the drawing.

Our winners have been selected and notified.