Ten Reasons Every Mom Must Talk To Her Daughter About Sex 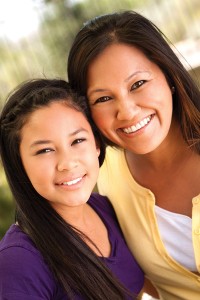 One of the most critical on-going conversations mothers can have with their daughters is on the topic of sexuality. My head spins with all the risk and hope that teeters on the existence of such a dialogue. Let me share the best news first: the number one risk-reducer for your daughter is parent/child connection. What you think about sex informs her view of it, and what you communicate about sexual risk and sexual theology helps to steer her towards healthy choices. You’re that powerful, Mom.

Most girls I’ve spoken with wish their mom would bring the subject up more often.

Most moms I’ve spoken with feel insecure about talking.

Let me fuel your interest by sharing these top ten reasons why every mom must talk about sex early and often. They aren’t pretty, but remember talking about sex reduces the risk and puts you in a place to reduce the pain if any does come your daughters direction. 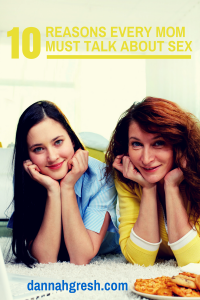 10.) Fatherlessness. At least half of the children in America will witness the divorce of their parents. For most of them, this will result in a  lack of relationship with their father. Today 1 in 3 live without their dad. This dramatically increases the risk of early sexual debut especially for girls. But moms who talk about the loss and discuss with their daughter how to replace it will reduce the risk. Start the conversation point blank by asking your daughter if she feels the proclivity to replace her dad with a boyfriend.

9.) Sexting. About half of teens say they are sexting before their 18th birthday. But few of them volunteer this information at the dinner table. Since sexting increases the risk of other forms of sexual sin, it’s important to keep a close pulse on the kinds of texts your daughter sends and receives. Try this question: “Has anyone ever sent you a naked photo or sexual text?”

8.) Sexual Assault. Sexting makes me think of sexual abuse because the fact is that sending a naked photo of a minor is a felony. It’s sexual abuse. Furthermore, 44% of actual, physically assaulted victims in the US are under the age of 18. Sadly, the risk in this area is much greater for girls. My experience in counseling them and their parents is that it’s really hard to bring the topic up unless parents have developed an open dialogue. Make your home a safe place to talk about even the most difficult of sexual topics.

7.) Erotica. Having recently written a rebuttal to the current wave of erotica fueled by Fifty Shades of Grey, I was shocked to find that the youngest user of erotica Dr Juli Slattery and I interview started reading when she was eleven. Teens are reading erotica behind their parents backs. The bondage, dominance, sadism, and masochism often celebrated in these books will do terribly damage to your daughters developing sexual self. This ones easy to talk about. Just ask, “Are any of your friends interested in Fifty Shades of Grey?”

5.) Hooking Up. Casual sex is the norm of the day. The problem is that our bodies were created for monogamy. Nuerochemicals like oxytocin and dopamine mingle into a cocktail that creates sexual bonding between partners. Their bodies make a promise whether they do or not. The long-term impact of bonding is especially powerful in girls, whose deep limbic system is larger than in boys. This makes the emotional fall all the harder once sexual bonding has occurred and a break up is likely to occur. Depression is the ugly aftermath. While the risks of STDs (STIs) are often discussed in sex ed settings, no one ever takes time to talk about the emotional aftermath. Make sure your daughter knows.

4.) Multiple Partners. According to Standford, the average sexually active female will go on to have 7.1 sexual partners in her college years. (It’s 9.7 for guys.) That’s a lot of bonding and brokenness unless you help her to ascertain the risk and avoid it. (Have I mentioned that it’s a good idea to talk about these things?)

3.) Sexual Pleasure. (The news is going to start to get better!) Sexual pleasure is one reason your daughter should wait to have sex! A University of Illinois study found that those having both the hottest and most frequent sex were not college co-eds with a variety of sexual partners but middle-aged people in mutually life-time monogamous partnerships. (a) Sex is better when you wait for it. And God’s gift is intended for pleasure.

2.) Sexual Purpose. In the Bible the word yada was used to describe the act of sex. It means “to know, to be known, to be deeply respected.” Not one inkling of the physical act taking place, it transcended the physical and spoke of the emotional knowing that truly great sex provides. But the word yada is used over 900 times in the Old Testament, mostly to talk about the deep knowing and connection we can have with the God of the Universe. Sexual intimacy was designed to point to a much greater relationship. Make sure your daughter knows this purpose.

1.) Intimacy. Intimacy is not just physical, but emotional. Talking about something as treasured and meaningful as sex requires intimacy. If you can build that in your daughter now, she’ll be blessed in her marriage relationship later if God has one for her to enjoy. Get closer by talking about one of the greatest gifts God has given to us as humans.

If the issues in this blog create an urgent desire to foster a conversation about sexuality, consider using our core curriculum, And the Bride Wore White, as a mother/daughter conversation tool. And the Bride Wore White provides practical “how-to” skills for aggressively pursuing purity in a world stained with sexual pain. Using the book in conjunction with the videos and leader’s guide (available as a mother-daughter retreat kit) adds individual activities, compelling conversation, and fun object lessons to the mix. Every session carries a deep scriptural truth to your teen(s) on an intimate level because it is presented by you with me. It’ll be a team effort with your heart’s desires for those you guide through the curriculum supported by me. You drive. I’ll sit in the back seat and navigate! You’ll get the most out of these videos if you invite your small group or daughter to read And the Bride Wore White and use our Leader’s Guide to take them/her through our conversational style eight-week study or retreat.