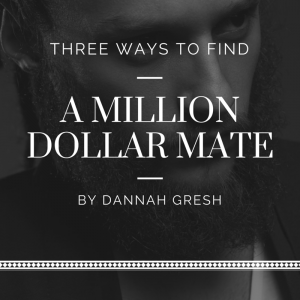 When you think about it, was the mail order bride service our forefather’s used that different from eHarmony or Christian Mingle? Ok, ok! I know I just stepped on some feminists toes and I get that. There weren’t, as far as we know, mail-order husbands. So, let’s just get to the point of my brain’s meandering today and level the playing field while we look for some top quality husband-material for you.

Let me start with a question: what single quality most attracts you to a guy? (No really. Answer the question before you read on.)

Finding the right mate is hard. What if you could use a method that guaranteed you’d find someone who would go the distance with you and would meet the deepest longings of your heart.

There are three basic type of attractions that lead us to a guy. Your answer to the question above reveals which path you are defaulting to, which is a big deal. Because two are potentially deadly and bring with them absolute promise of decreasing qualities. One—and only one— brings with it the potential of increasing love.

Did you say a guy’s smile, or his perfectly sculpted six pak appeals to you? You’re a girl with any eye for God’s finer works of visual art. You’re most easily attracted to a guy’s appearance.

This kind of attraction is very real. According to a Syracuse University study, twelve parts of the brain receive an intoxicating chemical cocktail when a person “falls in love.” And…get this…since this download occurs within one-fifth of a second after meeting a person, it is possible to experience “love at first sight.”

The problem with this kind of attraction: the law of gravity. Your guys body is going to change and eventually time will catch up with him. Can you still love him then?

Did you say you’re looking for a funny guy? Or the one who will have deep conversations with you over a cappucino? Could be that you’re most easily attracted to a guy’s personality. You’re not alone.

Psychology Today reported that women were three times more likely to give their phone number to a guy who was funny than one who was not. (Men, though often attracted by personality, are not quite as prone to this giving of phone numbers when a girl tells a good joke!)

When it comes to a girl being attracted to personality…well, it takes one to know one. I married a funny guy. And he’s great at deep conversations. But he’s also quiet and sometimes not funny. The public persona isn’t always the same as the one you meet at Starbucks. Can you love him then?

Before we move on to the third kind of attraction, it’s important to know that these first two are the potentially deadly ones. Don’t cross those wishes off your list, but take care the priority you give them in finding a guy. In Finding Your Million Dollar Mate, Randy Pope writes:

“Ninety percent of doomed relationships begin and end focusing on things that are decreasing. The body and personality both naturally decrease over time.”

Now, I don’t think he’s being scientific but using hyperbole when he gives that statistic, but his point is that body parts droop and the brain ages, too.

What’s the Bible say? Ahabah (pronounced AH-ha-vah) is the Hebrew word that might be used to describe two people falling in love. This “love” is characterized by a spontaneous, impulsive display of affection and attraction. While such affection might relate to a friendship in the Hebrew culture, the word most often refers to the kind of attraction that happens between a man and a woman. In these cases, it is largely a physical attraction and emphasizes a sexual aspect of the relationship. At the base level, we’re in it for what we can get. It’s a selfish kind of attraction.

Is there any specific instruction for you about falling in love based on attraction? About seeking to have or possess someone based solely on how much we value certain aspects of that person versus the whole of them? Glad you asked. It says this:

“I adjure you…that you not stir up or awaken love [ahabah] until it pleases.” Song of Songs 2:7

In other words, “Please don’t fall in love” until….the right time. An interesting phrase to find in the Bible’s most romantic book. But it doesn’t say you can’t have that kind of love. It just can’t come first.

Maybe the thing that most attracts you to a guy is seeing him read his Bible? Or watching him serve with a heart full of God’s love? You’re on the right track. (For the record, most of us don’t pursue this kind of attraction naturally. We have to choose it.)

Agape is the word used to describe the love demonstrated by Jesus Christ. It’s concisely expressed when Jesus says this: “Greater love has no one than this, that someone lay down his life for his friends” (John 15:13). Agape is a love that will stop at nothing to express itself to another.

While we’re called to agape in all of our interactions, one relationship in particular is specifically designed to uniquely mirror God’s love for us. The apostle Paul writes that we should see agape unquestionably at work within marriage. In fact, the love of marriage is supposed to be so powerful that it reveals God’s agape to a lost world. (See Ephesians 5:31–32 for starters if you don’t believe me!)

MARRIAGES built upon selflessness, choice, commitment, and practicality tend to last longer than those built upon hot bodies and good jokes. For example, modern-day arranged marriages seem to be working longer—if not better—in countries like India where the divorce rate hovers at 1 percent compared to fifty percent in the United States. (However, India’s rate is rising since the Bollywood culture has begun promoting the idea of falling in love as opposed to arranging it.)

I know! I know! That sounds so confining and controlled, but everything can be done in freedom or in legalism, including arranging a marriage. A missionary friend in India says the Christians she knows love the romance of an arranged marriage, and they aren’t as archaic as you might think. A young man who has his eye on a bright-eyed Indian girl will go to his parents or his pastor to make arrangements. Through their advice and leadership, it is determined whether the couple would have the commitment and internal qualities to complement one another. The couple invites the authorities in their lives into the courting process to ensure things progress at a pace that allows true love—not mere attraction—to grow. Couples find a beautiful security in the process that keeps them from taking the fall.

What I want to say is that perhaps it’d be a good idea to observe the wisdom written in 970 BC that we “not arouse or awaken love until it so desires.” On your journey to find true love, I encourage you to carry this advice with you: whatever you do, don’t fall in love.

Well, I don’t mean never. The steamy poetry of Song of Songs wouldn’t exist if we never gave way to physical and emotional attraction. It’s just that, in a healthy relationship, ahabah never grows stronger than agape. Attraction will exist, but it cannot be where you begin true love.

You have to start that by falling in love with Christ, and I’ve written an entire book on that called Get Lost: A Girl’s Guide To Finding True Love.

A great related blog by my friend Lisa Anderson over at Boundless is titled “What if she’s not the right one?”