Trusting A Condom Could Kill A Friend 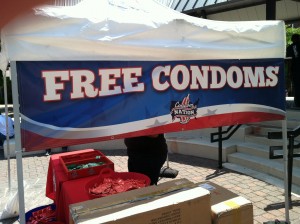 “Trusting a condom could kill a friend.”

That’s what I have to say about it.

The Condom Nation Tour, a publicity campaign that launched on National Condom Day February 2012, will be in 40 cities through out the year with a goal to hand out ten million condoms this year. And I, along with my good friend and international sex education expert Pam Stenzel, have something to say about it. We intend to collaboratively hit over 100 cities this year to be certain that teenagers know that condoms are not a fail-proof method of controlling STD’s.

I’m not offended at the thought of teaching teenagers about contraception any more than I’d be offended about factually presenting other issues related to sexuality in an anatomy and physiology class. I’m concerned that publicity efforts like the Condom Nation Tour tout condoms as a fail-proof solution to the STD epidemic when they are not. Currently there are over 19 million STD infections in the United States each year.[i] The Condom Nation Tour claims that “if more Americans had access to condoms, these rates would plummet.”[ii] That’s just putting it too simply. What if your kid is the one who lands on the wrong side of the stats? The condom fail rate is simply too high for educators to place so much emphasis on it.

The human papilloma virus (HPV) is a common viral STD. It’s so common that at least 50% of sexually active people will get it.[iii] It’s recognized as the only cause of cervical cancer.[iv] HPV is considered “necessary” to acquire this type of cancer. (The current Gardisil vaccine prevents two of the strains responsible for about 70% of cervical cancer. Two of the strains the vaccine does not confront are responsible for the remainder of cancer cases. So, it does not provide guaranteed protection.) Since HPV is spread by intimate skin-to-skin contact and does not transmit through bodily fluids, a condom in essence provides no protection against it.

A tragic risk that no one seems to talk about is infertility related to Chlamydia. If a girl gets it, it is unlikely that she’ll ever know. Only a minority ever experience tell-tale symptoms until it is too late. By then she has likely developed pelvic inflammatory disease, which leads to infertility. No babies. Ever. Is that a risk you want your daughter to take? Chlamydia is the most common sexually transmitted disease circulating today.[v]

Many sex education experts focus on risk reduction (i.e. condoms). God’s good plan offers teens complete risk avoidance. The only sure way to avoid sexually transmitted disease is to abstain from sex until you are in a life-long mutually monogamous relationship. In the past five years, Sexual Risk Avoidance programs have shown the greatest success in changing the behavior and attitudes of adolescents.[vi]

I don’t have a tour bus and I won’t be standing on street corners shouting ‘free condoms.” I will be taking a more cognitive approach.  My Pure Freedom event for teen girls and their moms will feature a new section on condom risk, and my newly revised And The Bride Wore White has updated statistics and sidebars on STD’s. And I’m running a campaign to raise awareness about the risk associated with condom use. What are you doing to raise awareness?