Was Mary A Virgin? [VIDEO] 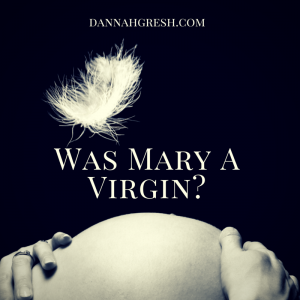 “We can determine with certainty that the virgin Mary was, in fact, not a virgin,” wrote one self-declared atheist. His was one of many blog posts and articles I found debunking the “myth” of Mary’s miraculous conception. Admittedly, some of the articles I read on this topic were written by respected religious scholars… even those published in Pulitzer Prize winning journals. A Christian pursuing an intelligent faith simply must stop to consider how incredibly ludicrous it is to believe that Jesus was born of a virgin. Yes, I said “ludicrous!” Fact: it’s not scientifically possible for a virgin to give birth.  If the hair on the back of your neck is standing on end, relax. I’m going to offer you some intelligent faith-food to defend Mary’s virtue. Here are two fallacies unbelievers and even believers are embracing as evidence that Mary was not a virgin, and the logic to debunk them.

1.) The virgin birth was a great cover up. Mary was just another teen pregnancy with a highly creative way of getting away with it! She wouldn’t be the only one to attempt this scam. Last year the Daily Beast reported 45 “virgin births” according to a North Carolina study.  We won’t get into the messy details, but there’s a smoking gun found in this study that tells us girls who think they’re supposed to be virgins when they wed are a little more likely to go to drastic measures when they play the great cover up game. Here it is: “The virgins who reported pregnancies were more likely to have pledged chastity (30 percent) than non-virgins who reported pregnancies (15 percent).” How much pressure was Mary under back-in-the-day than these girls who’d obviously loosened their chastity belts at least once? I can see where a person of unbelief might be energized by this rumor mill, but a Christian cannot embrace it.

Believing that the virgin birth was a cover up requires us to reject both the deity of Christ and the salvation of our souls along with Mary’s big, round rumor. We must throw this baby out with the dirty bath water. And most people of faith do.

2.) Faulty translations created the myth of a virgin birth. Some religious scholars argue that the language used in the Scriptures implies that Mary was pre-pubescent. They argue that it is possible that Mary was not yet menstruating, but the miracle would be that the Holy Spirit would enable her body to become pregnant anyway. (So, I guess they’re going for half a miracle here. But let’s go with it, shall we?)

We must admit that the language is complex in some places. For example, the prophetic passage in Isaiah 7:14 declaring Christ’s birth would be to an almah, which can sometimes be translated as a young woman not yet sexually mature. Here’s where believers jump on the bandwagon of doubt to make Christ’s birth a little more “believable” to the masses and perhaps even themselves. But don’t be too quick to join them.

Here’s what’s wrong with this argument: the whole context of Scripture eliminates the confusion.

Almah could be used for either a young woman not sexually mature, or to refer to a sexually mature woman who was a virgin. A closer look finds that we can pinpoint which one is meant in Isaiah based on other references to Mary’s sexual status. Luke 1:27 declares Mary was a parthenos, or virgin. Mary herself refers to her virginity, having not “known” (ginosko*) a man. (Luke 1:34) And the clincher is a verse that refers to Joseph:

“But he did not have sexual relations with her until her son was born. And Joseph named him Jesus.” (Matthew 1:25) The Scriptures clearly state that the birth of Christ involved only one innocent young virgin and the power of the Holy Spirit. No man was used in the making of the Son of God. The question of Mary’s virginity is not about Mary at all, but about the authority of the Scriptures. And if you throw this out, of what value is the rest of God’s word?

This argument is critical. Deep theological truths about Christ rely on his miraculous conception. Jesus was fully human (Hebrews 2:14) and fully God (John 1:1; Colossians 2:9). For this to occur, did he not need both a human mother and a Divine Father? As C.S. Lewis once wrote:

“When you beget, you beget something of the same kind as yourself. A man begets human babies, a beaver begets little beavers, and a bird begets eggs which turn into little birds” (Beyond Personality, 1948, p. 5).

When God the Father “begets” Jesus, he “begets” God. This truth about Christ’s birth is critical to the good news of Christ’s even more miraculous death and resurrection. Just as his birth is worth nothing without the miracle of Mary’s virginity, so his death has no value without the miracle of defying it. And the good news is that even in this so-called post-Christian era, 73% of American’s still believe in the virgin birth according to Huffington Post.

I’m not really worried when the atheists of this world try to explain away the miracles of Christmas. It’s the believers who try to make sense of it all that concern me. If we explain away Christ’s birth, how long will it be until we begin to release the miracle of his death? Though we can be intelligent and use great reasoning as we defend our beliefs, faith cannot rely on physical science to prove efficacious for our souls. When I really think about it—as intelligent as I want my faith to be—it doesn’t make sense. It’s a tad ludicrous.

Christ’s arrival as a helpless baby in the smelly animal shelter is a very strange way to save the world.

*Ginosko is the Greek form of yada (to know, to be known, to be fully respected) used as early as Genesis 4:1 to refer to holy, marital sexual oneness. From Genesis to Revelation we can trace this powerful word (and I did in What Are You Waiting For: The One Thing No One Ever Tells You About Sex) to see the fuller picture of sexuality in the gospel.