“Wheels Up; Rings Off”: But How Old Were Those Women? 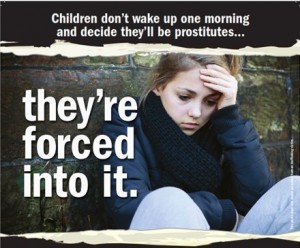 Eleven Secret Service agents and 10 military personnel are under investigation for having as many as 20 sex workers in hotel rooms before President Obama’s arrival in Colombia. It’s alleged that this isn’t unusual conduct for some members of the Secret Service whose private travel motto is “Wheels Up; Rings Off.” Read between the lines and ache at the complete absence of integrity in the officials whose spines are supposed to be strong as steel so they can sacrifice themselves for our political leader. Apparently, their character is not so solid.

As news of this Secret Service sex scandal breaks, my daughter’s bags are packed to go fight sex-trafficking in India. The village where she will be working initiates girls into prostitution on their twelfth birthday. This has been most sobering to me. As a result, the picture I’m getting of this breaking sex scandal might be different from yours. It’s all right and good that we should consider if the actions of these—do I have to use the word “men”—were a risk to our President. But what about the twenty women? And were they even women at all?

In Colombia, prostitution  is legal for fourteen year olds. That’s young, right? But one report of prostitution in the country revealed that prostitution begins at a very young age—usually before adolescence. (America is not exempt from this incomprehensible evil. The photo in this blog is pulled from a PSA created by Truckers Against Trafficking.) It is estimated that there are 35,000 child prostitutes in Colombia. They were probably not woman at all in those hotel rooms. They were probably teenage girls. And it’s most likely that those girls experienced significant childhood abuse of some type, and were forced into prostitution. Fifty to ninety percent of prostitutes report childhood sexual abuse. Seventy percent say that the abuse had an influence into their entry into prostitution.

I imagine a lot of people reading the Washington Post today cringed at the infidelity, and pictured adult women committing the act of adultery with these married individuals. But the fact is that it’s highly likely that these employees of the government—I just can’t get myself to use the word “men” for them—were paying to have sex with teenage girls who are so broken by a past filled with trauma that they’ll gladly mop up a man’s sexual greed for a few bucks. In the United States, we call that statutory rape. The penalty in Virginia, where I imagine some of the alleged participants may live, is five years to life in prison. As it should be. Should we be less concerned because the victims did not have an address a few miles from our capital?

I want to know how old those “women” were.

If you think that’s valid, let’s make a little noise. What good is all this social media at our fingertips? (I’m pretty sure its best use is not to broadcast the mundane facts of our life: “Lie To Me marathon.” “Ack! Too many ideas in my brain!” “Elmo is my favorite.” These were a few I just read on my newsfeed.) I think that the highway of information created by Facebook, Twitter, and Pinterest is best used when we are socially responsible. Now is a great time to prove it.

But don’t be silent. Our service men should be the kind that knock down the doors of brothels to protect victims of the sex trafficking industry; they should not be knocking on them.