Will Your College Choice Impact Your Sexual Behavior? 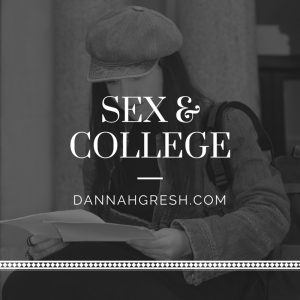 Once when I was speaking at a campus event at a Big Ten University, a couple approached me. He was a football player—all but worshipped in a town where the blood runs the same color as the team uniforms. Proud as could be, he stood beside his girlfriend to tell me that they were using his “celebrity” status to encourage purity on the sex-saturated campus.

“Whenever we get the chance we share our philosophy?” he beamed…with a little too much pride, I might add.

Noticing a look of distinct shame on her face, I felt the need to clarify.

“What is your philosophy?” I asked.

“We just stick to oral sex,” he said.

She burst into tears.

Let’s shoot straight. There’s a lot of sex going on out there.  And depending on where you go to college, it’s going to be harder or easier to live out your sexual convictions whatever they may be. Here are three things every college-bound high school student—and their parents—need to consider.

March Madness is not just for basketball fanatics, but also college seniors who wait with bated breath for acceptance letters…or rejections from their top picks for higher education. (I’m here to tell you that the rejections aren’t always bad news. They may be God redirecting you.)  The number one selection criteria for high school seniors? Academic reputation, followed second by career placement after graduation. I’m not sure these factors should be at the very top of the list, and I’m concerned about what isn’t considered as you decide where to spend four years being indoctrinated with worldview. What seniors aren’t considering: how an institution might impact their faith and moral convictions. Would you mind taking a moment to think about this with me? Because in all of the statistics on sexual pain and brokenness I’ve ever seen, I have one that every college-bound high school student and every parent of them must see. You see, the college or university you choose is going to impact your morality significantly more than your educational and career direction. Here are three things you need to consider when you’re college bound.

1.) No university can guarantee you’ll get a job that will require a college degree. While the quality of your education should be uncompromised, don’t get too prideful because you may not end up using it. According to the Washington Post, only 62% of college grads are using their degree. Many are accepting jobs that do not require a college degree and the massive amount of debt that comes with it. There just aren’t enough jobs to match degrees. In an ever competitive environment, the quality of your degree matters but more than that…the direction and call of God on your life is the only thing that really promises the right career placement.

2.) No university will guarantee placement in a career related to your degree. In fact, only 27% of college grads actually get placed into their field of study. So many students compromise moral climate and spiritual feasting during their college years in the name of a specific field of study. Your degree should not be just about what you study, but the character it takes to turn the tassel. The discipline, mentoring from advisors, friendships that forge character, and other things actually do matter. The college experience should not just prepare you for a career, but needs to be preparation for life. That’s something every one will use.

3.) Every university provides moral guidance. The sexual behavior of students may be the biggest indicator of the moral influence of the higher education environment. If you’re headed to a public campus, roughly 81% of the students you encounter will be sexually active.[ii] If you end up on a Catholic or private secular campus, roughly 65% admit to non-virgin status.  But what about the Christian evangelical university? Is there a difference? Yes, there is. And it’s one worth considering. On a Christian Evangelical campus, only 21% have had sexual intercourse.[iii] 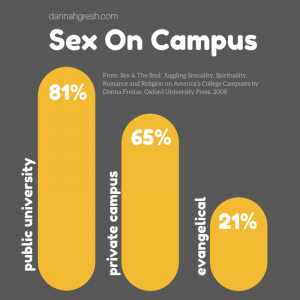 The college campus you select is going to provide moral guidance for you. The question is: what kind? Author Donna Freitas says that public universities and private campuses have a “hook up culture”, while private Christian evangelical universities encase you in a “modesty and purity culture.” And that very well could impact you.

It’s not just the moral fabric of life that is impacted by a university choice, but more importantly the very foundation of faith. 50-80% of college students who grew up in an evangelical church, walk away from the Church their freshman or sophomore year depending on which survey you read.

Please don’t misread this blog. I’m not saying the quality of education and career placement don’t matter. I’m just saying that the impact on your faith and moral behavior should also be at the top of the list.

You can pursue an education with both high academic standards, successful post-college placement and excellent moral quality. Many Christians assume that the quality of a Christian education won’t complete. That’s simply not true. For example, my alma mater, Cedarville University, consistently outperforms national benchmarks in career placement. Is the quality of education good enough? Well, it helped to mold me into a best-selling author and national spokesperson on one of the toughest subjects being discussed today—sex. My degree prepared me to frequently and intelligently defend conservative views in forums such as CNN, FOXNews, People Magazine, and even on the TEDTalk stage.

Here’s the bottom line:  let God—not the world’s standards of higher education— guide you to where you’re supposed to be. If that’s a secular university, be wise to the risk. It is not small. Plant yourself in a micro-community of moral excellence and faith building teaching. But first and foremost, I plead with you to consider Christian liberal arts schools like Cedarville University.

Much of this blog post is excerpted from my book for college-bound and college-aged students, What Are You Waiting For: The One Thing No One Ever Tells You About Sex.